In 2014, the French language and cultural centre “French Moments” will be back in France with two intensive courses in Paris and beautiful Sarlat-la-Canéda in Périgord.

The French intensive courses run by French Moments are designed for adult English-speakers who want to learn (or improve) their language skills while enjoying the discovery of the region where the classes take place. Designed with two levels (travellers and conversation), the course puts a strong emphasis on teaching the culture alongside the language and is limited to 10 students per group.

The morning classes are run by dynamic and friendly French-native teachers. In the afternoon, excursions are organised in the town or the surrounding areas with further opportunities for students to speak the language in a practical way and interact with locals.

In 2012, French Moments ran a two-week course in Kaysersberg, a charming little town along the Alsace Wine Route. The morning classes were followed by exciting excursions and French-related activities such as a French treasure hunt, a visit to a wine cellar and a cheese factory, a cooking workshop in Strasbourg, a guided-tour of the Haut-Kœnigsbourg Castle, the discovery of Europe’s largest open-air museum at Écomusée d’Alsace, two tasting meals and much more… 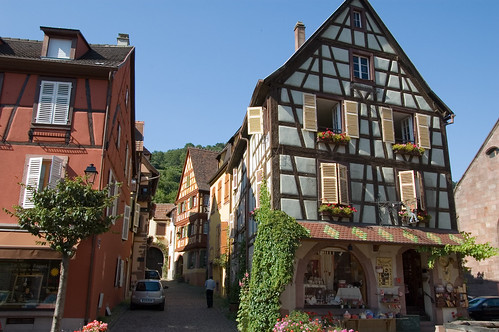 French lessons in the lovely village of Kaysersberg – source

The first French intensive course in France for 2014 will take place in Paris from the 19th to the 25th July [conversation level] and from the 26th July to the 1st August [traveller level]. The afternoon excursions have been carefully planned to reflect the theme of “Siècle des Lumières” (Age of Enlightenment).

The second French course will take you to Sarlat-la-Canéda, capital of the Périgord Noir where you can learn French surrounded by the rich medieval history of the Dordogne Valley while tasting the delicious local cuisine and wines. The course will take place from the 1st to the 12th September 2014 [traveller & conversation levels] in a beautiful and peaceful villa.

Pierre, who heads up the French Moments team was born in the city of Nancy, Lorraine, famous for its Neo-classical square Place Stanislas which has been listed by Unesco as a World Heritage site since 1983. After living in Germany during his childhood, he has also resided in France and England with his wife Rachel from Portsmouth (UK) before the couple moved to Australia in 2006 to start French lessons in the Lower North Shore of Sydney.

In 2008, Pierre and Rachel Guernier founded French Moments in Sydney, Australia as well as a French language centre called “French in Sydney”. Pierre previously taught French in London at the Institut Français, also at a leading language school in Paris and various schools in Sydney,

This teaching experience enabled him to work for companies, institutions and embassies as well as individuals of all ages. Pierre holds a Master of Translating & Interpreting English-French with the degree of Master of International Relations and a degree of Economics and Management.

The couple have a passion for everything French, and enjoy promoting France, which led them to start a website (www.frenchmoments.eu) which contains cultural information about France: sites, monuments, history, lifestyle, etc. The comprehensive website is an on-going work in progress and new articles are added weekly.

For more information about French Moments’ intensive courses in Paris and Sarlat, contact their friendly team at bonjour@frenchmoments.com or visit www.frenchmoments.eu.